This Is How You Pick The Perfect Cut Of Beef 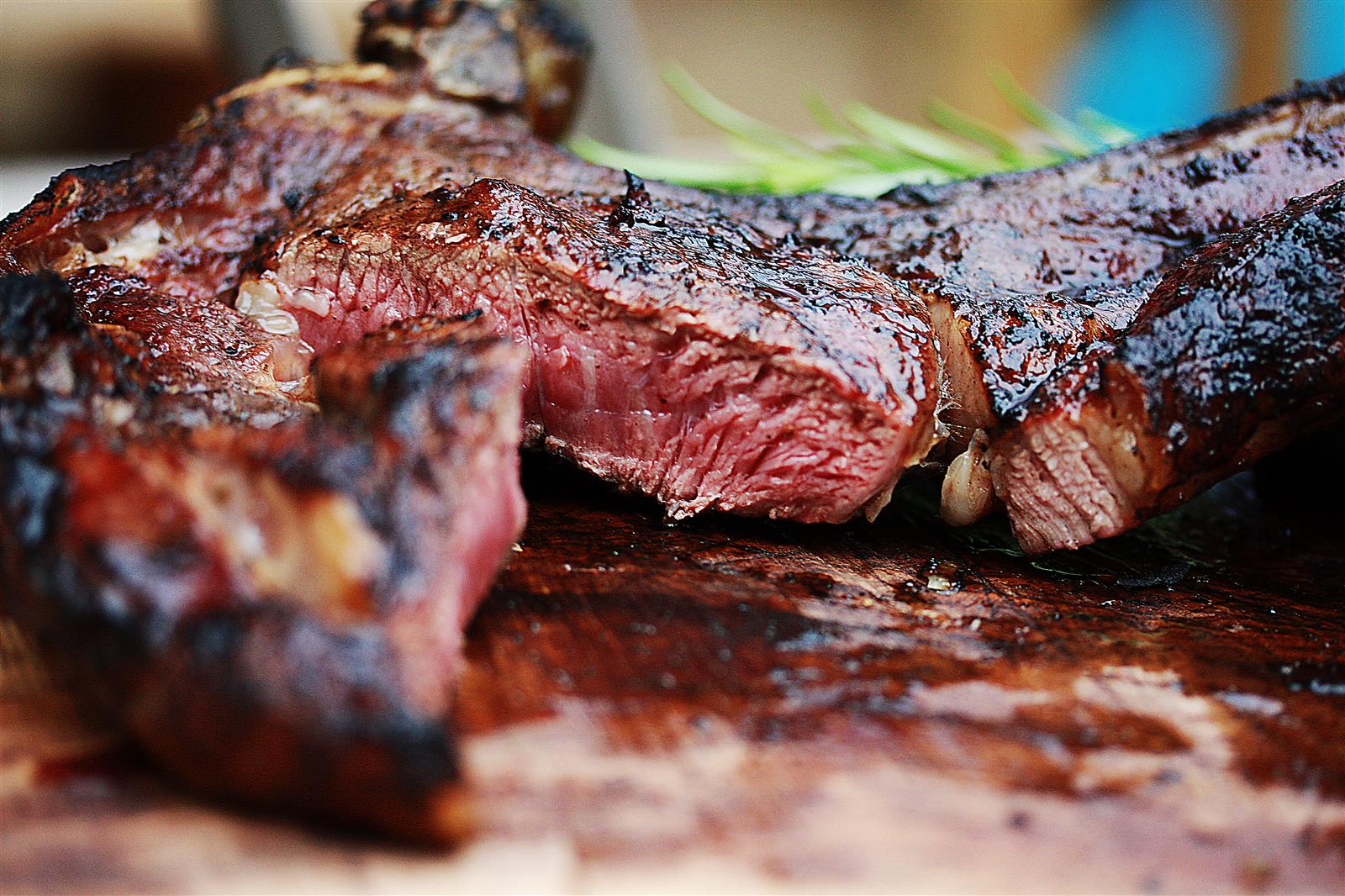 Beef has been and always will be what’s for dinner.

Porterhouses, filet mignon, and strip steaks are staples on restaurant menus and in grocery aisles. But there are some lesser-known cuts that are just as tasty and often less expensive. 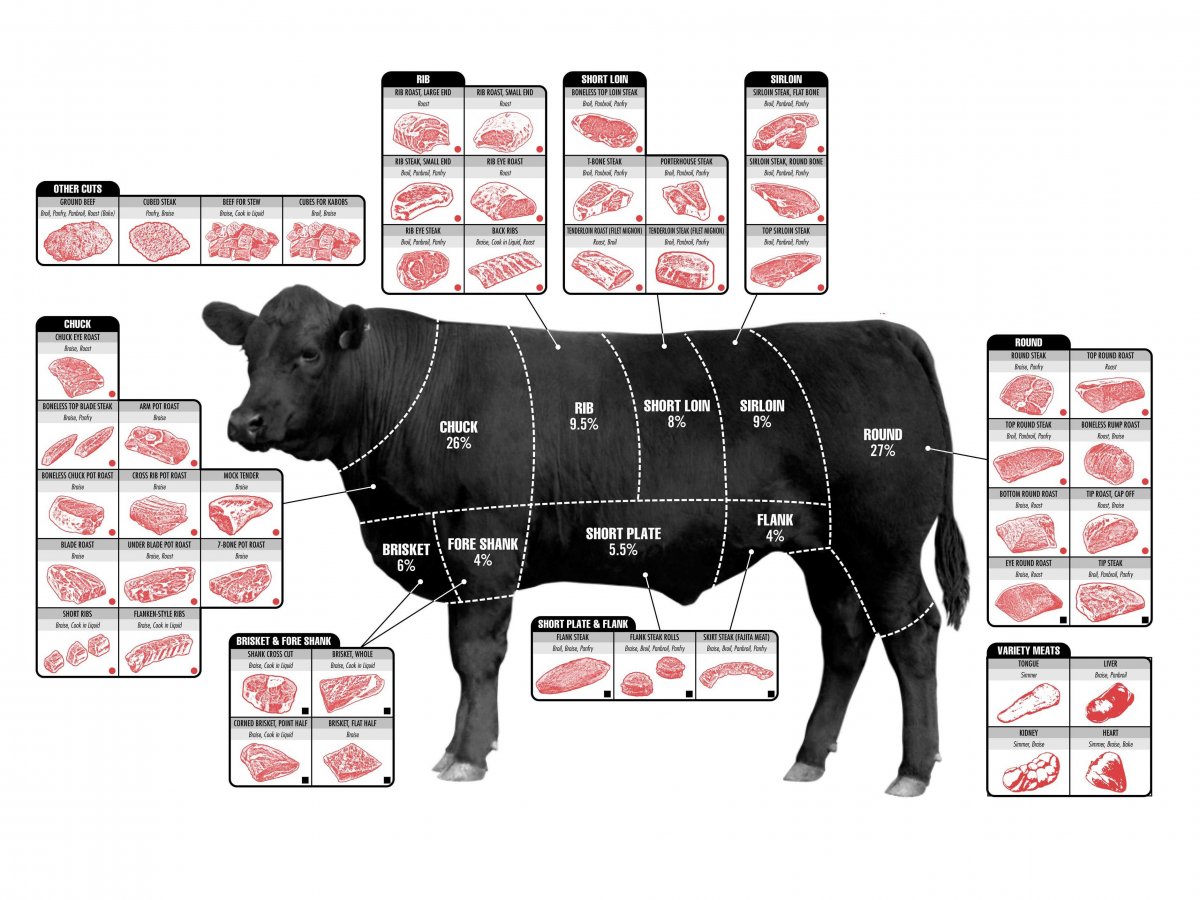 Find out more about the major cuts of beef, and the best ways to prepare them in this beef breakdown.

The chuck contains connective tissue (including fat and collagen) which partially melts during cooking. The meat is prepared by stewing, slow cooking, braising, or pot roasting to make the meat tender.

Chuck is also commonly made into ground beef (for hamburgers, meatballs, etc.), and is one of the more economical cuts available. 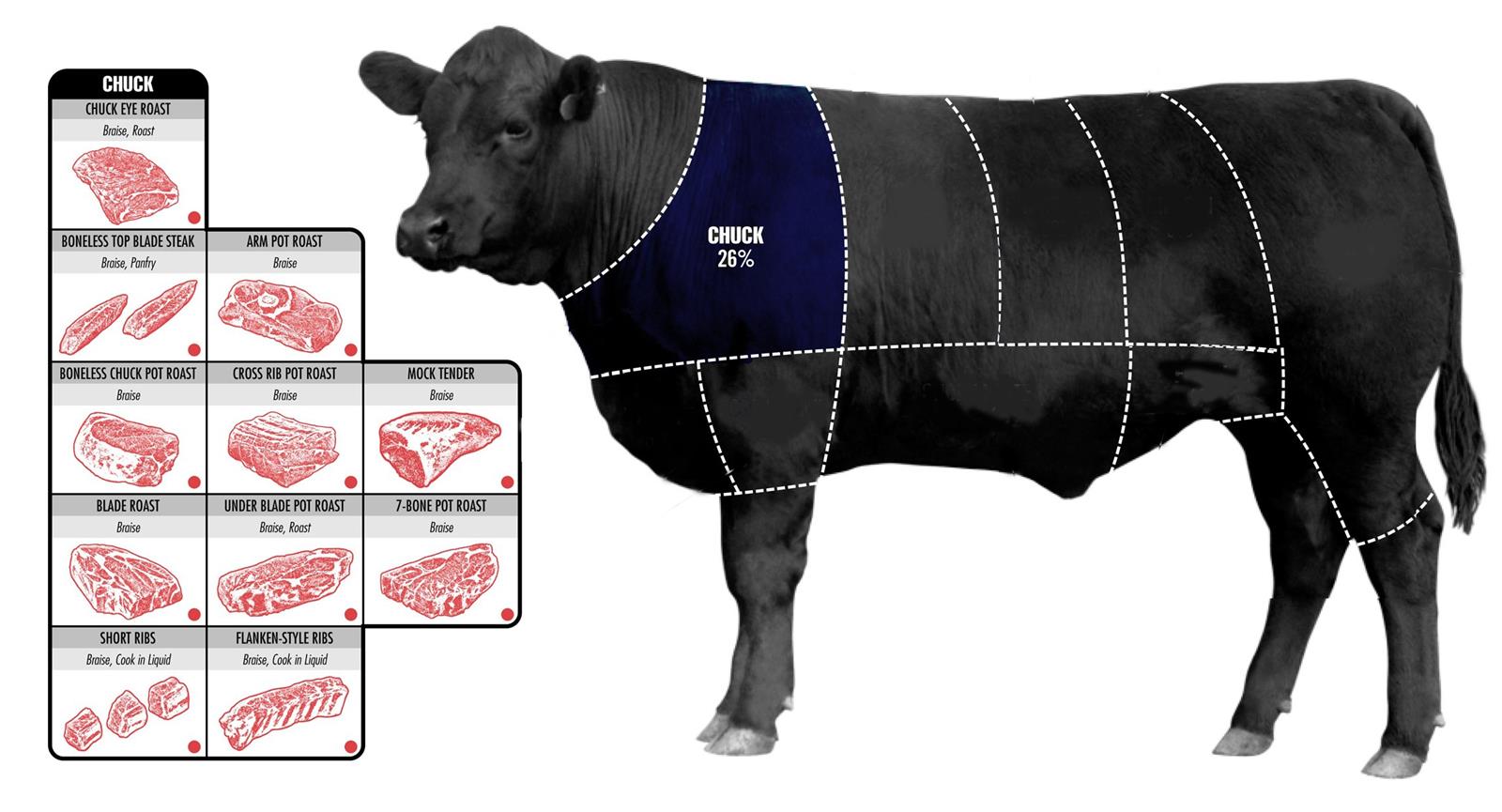 Made from the breast or lower chest of the cow, brisket is a tough beef cut that is prepared by braising or slow smoking.

It is also commonly cured and made into pastrami or corned beef. 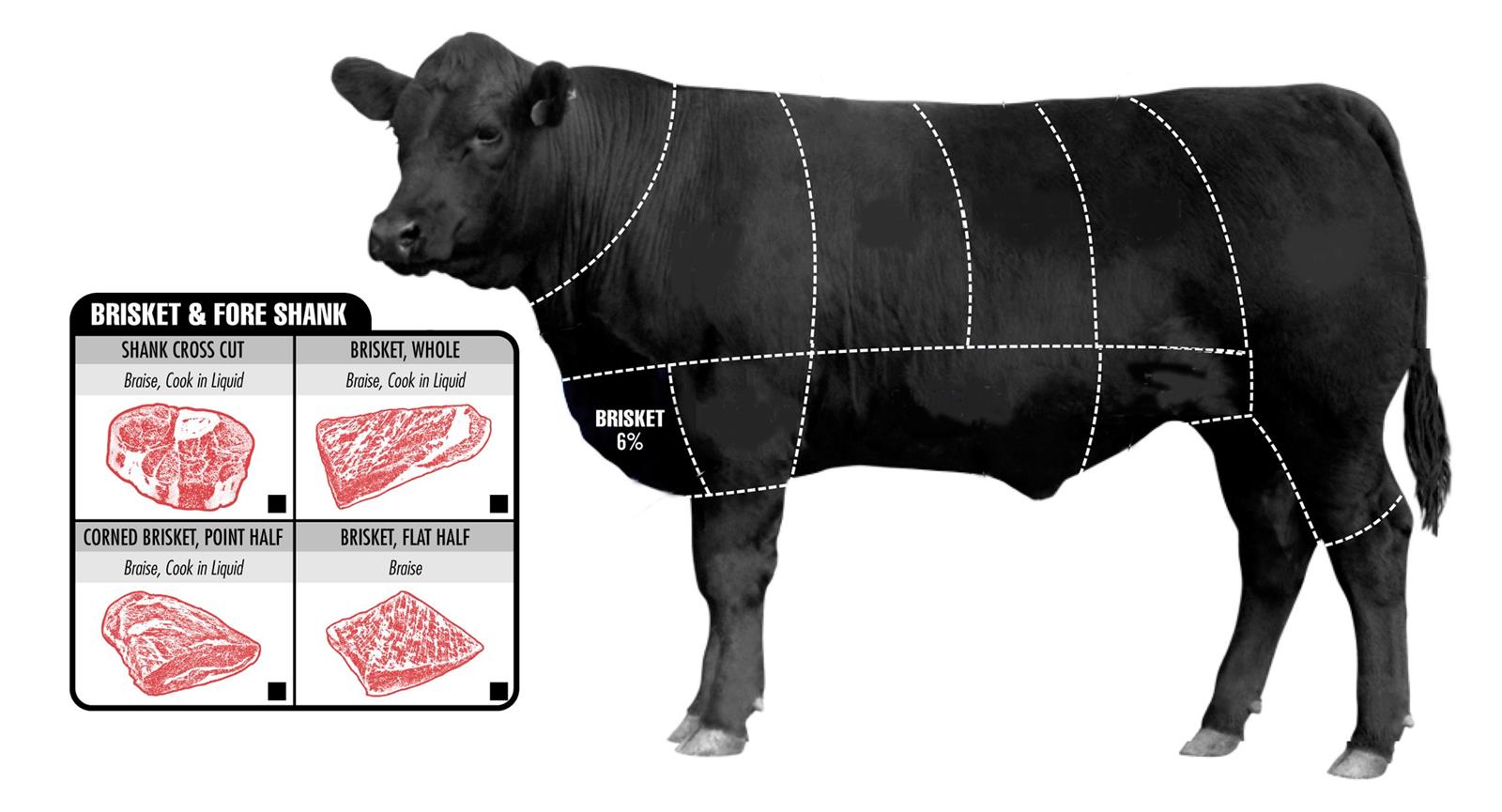 Taken from the upper leg of cattle, the fore shank is tough, dry, and sinewy. The meat is commonly cooked in moist heat or used to create beef stock.

Since not many people buy beef shank, it’s not typically found in stores as anything other than low-fat ground beef. It is fairly cheap in butcher shops though, and an ideal cut for beef Bourguignon. 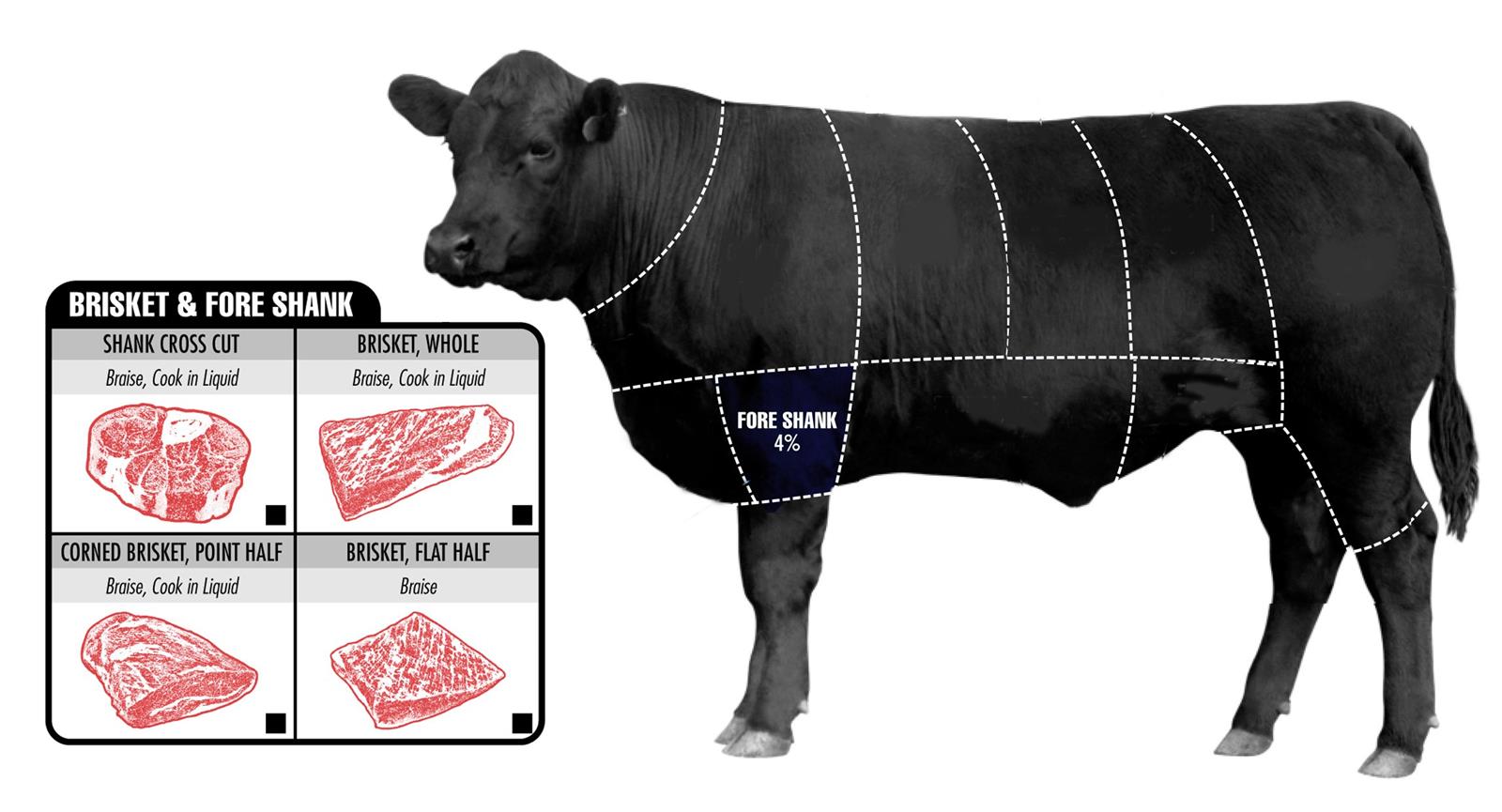 Plate cuts are from the underbelly of the cow, and are made of tough, fatty meat — usually from the cow’s diaphragm.

In addition to being cheap, plate cuts are extremely flavorful and are often marinated before grilling or pan-searing to add moisture. They’re typically used in stir fry or fajitas. 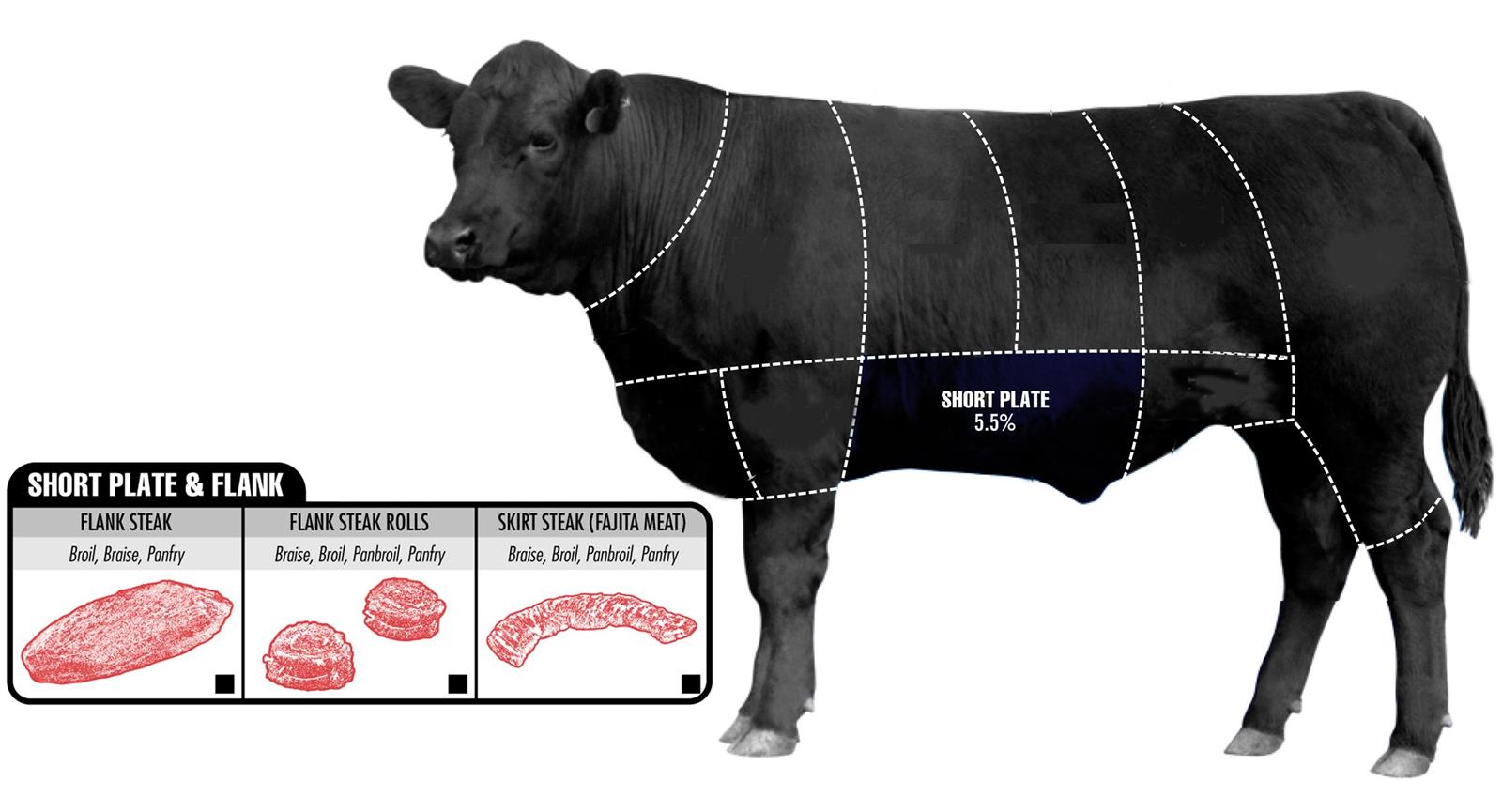 Flank steak is from the abdominal muscles of the cow. Because it can be tough, the cuts are grilled, pan-fried, broiled, or braised for tenderness, and are often marinated as well.

Like plate cuts, flank steak is common in stir fry and often used in Asian cuisine. 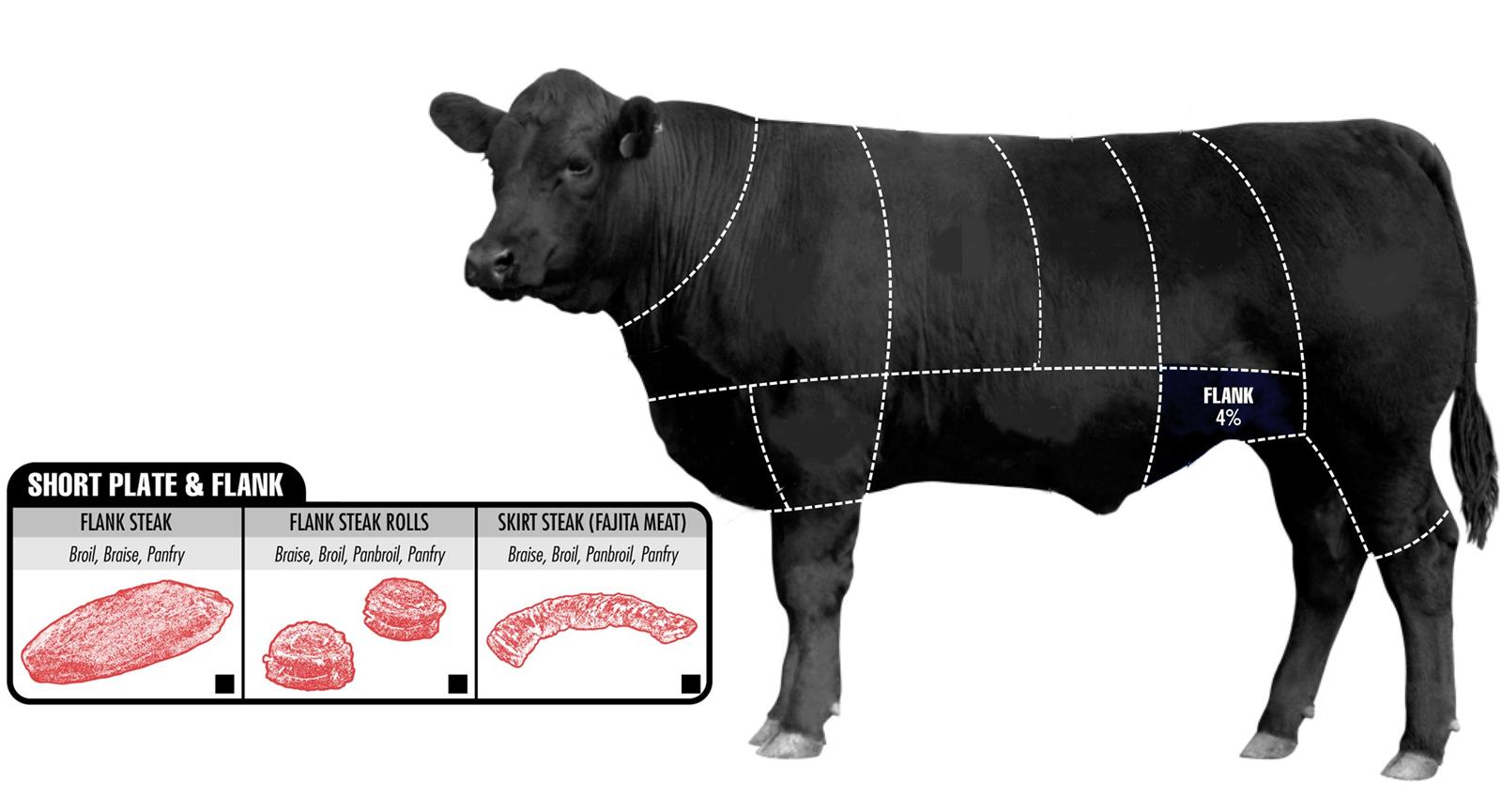 Round cuts are taken from the leg and backside of the cow. Because there’s minimal fat marbling, many chefs make burgers or sausages from the inexpensive beef.

It can also be slow cooked in moist heat (like braising), or sliced thin and dried/smoked at a low temperature to make jerky. 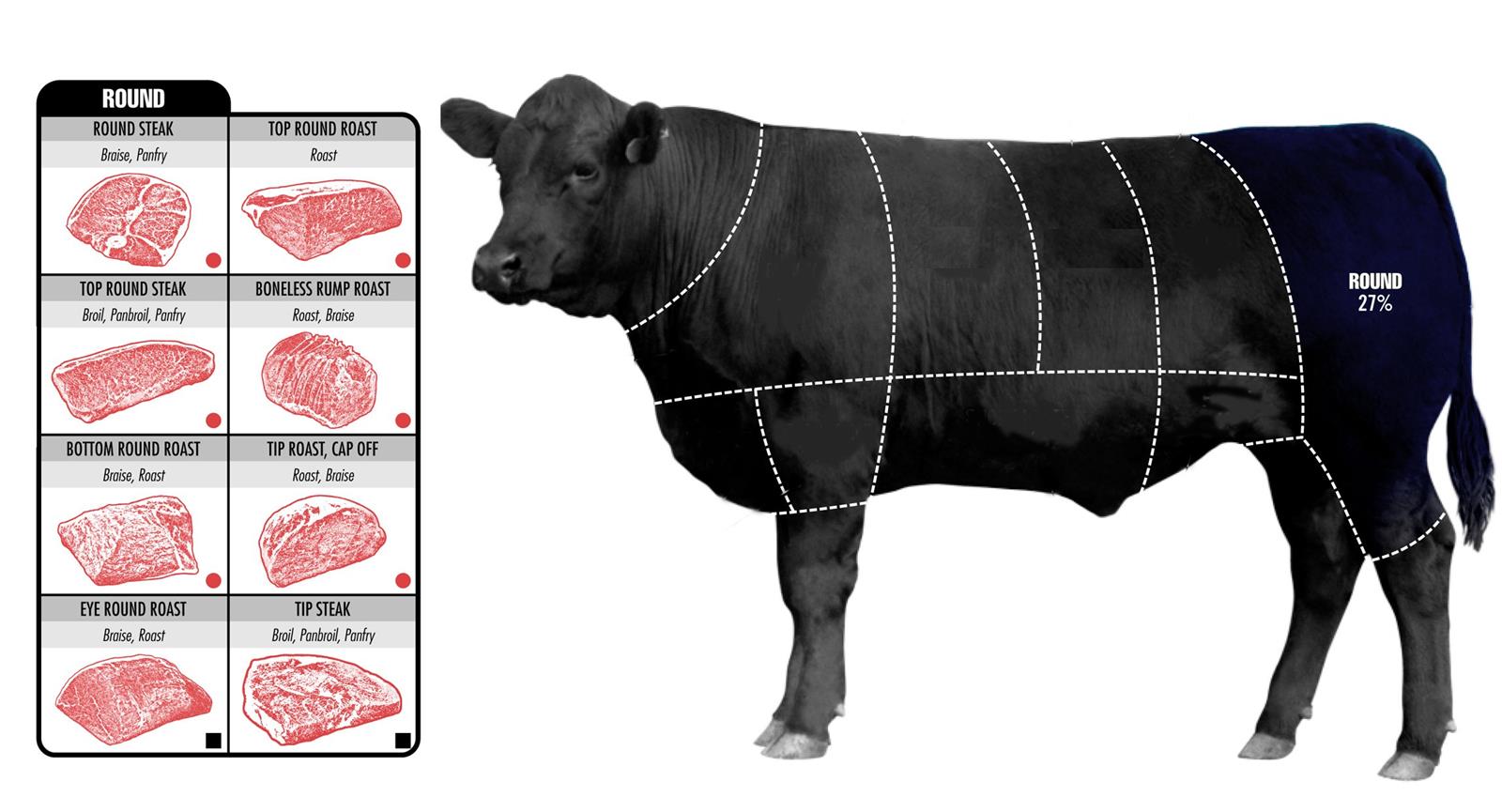 Sirloin cuts make sirloin steaks or tri-tip roasts/steaks (commonly called “culotte”), which are chewy, but very flavorful. They’re found near the rear end of the cow and are a great value.

Sirloin cuts are often labeled by the bone they contain: Flat, round, wedge, or pin. 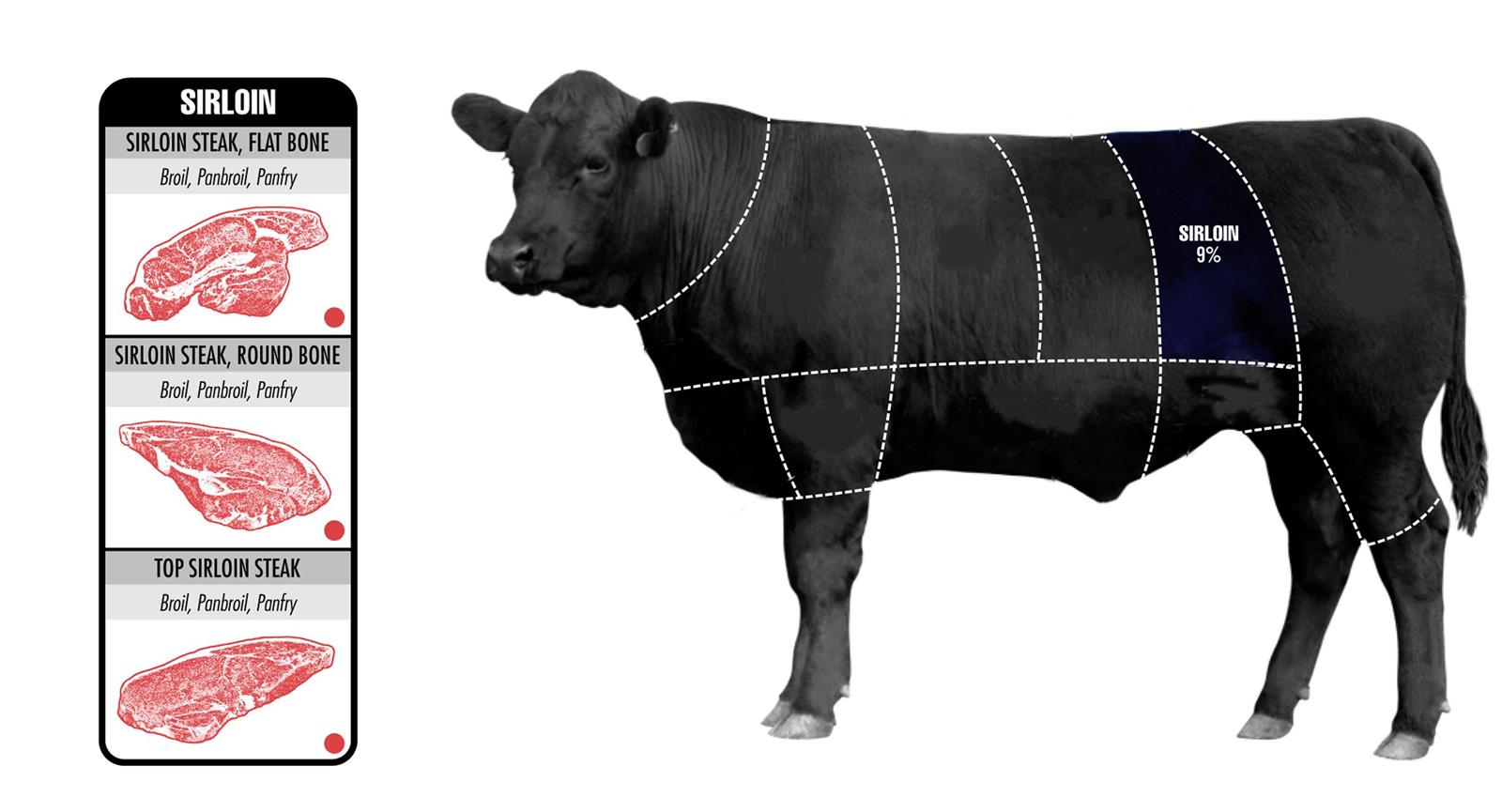 The short loin cut of beef has the most popular cuts around, including porterhouse, T-bone, New York strip, and filet mignon.

The short loin contains part of the spine, and is located immediately behind the ribs. The cuts are extremely tender and best for grilling or pan searing. 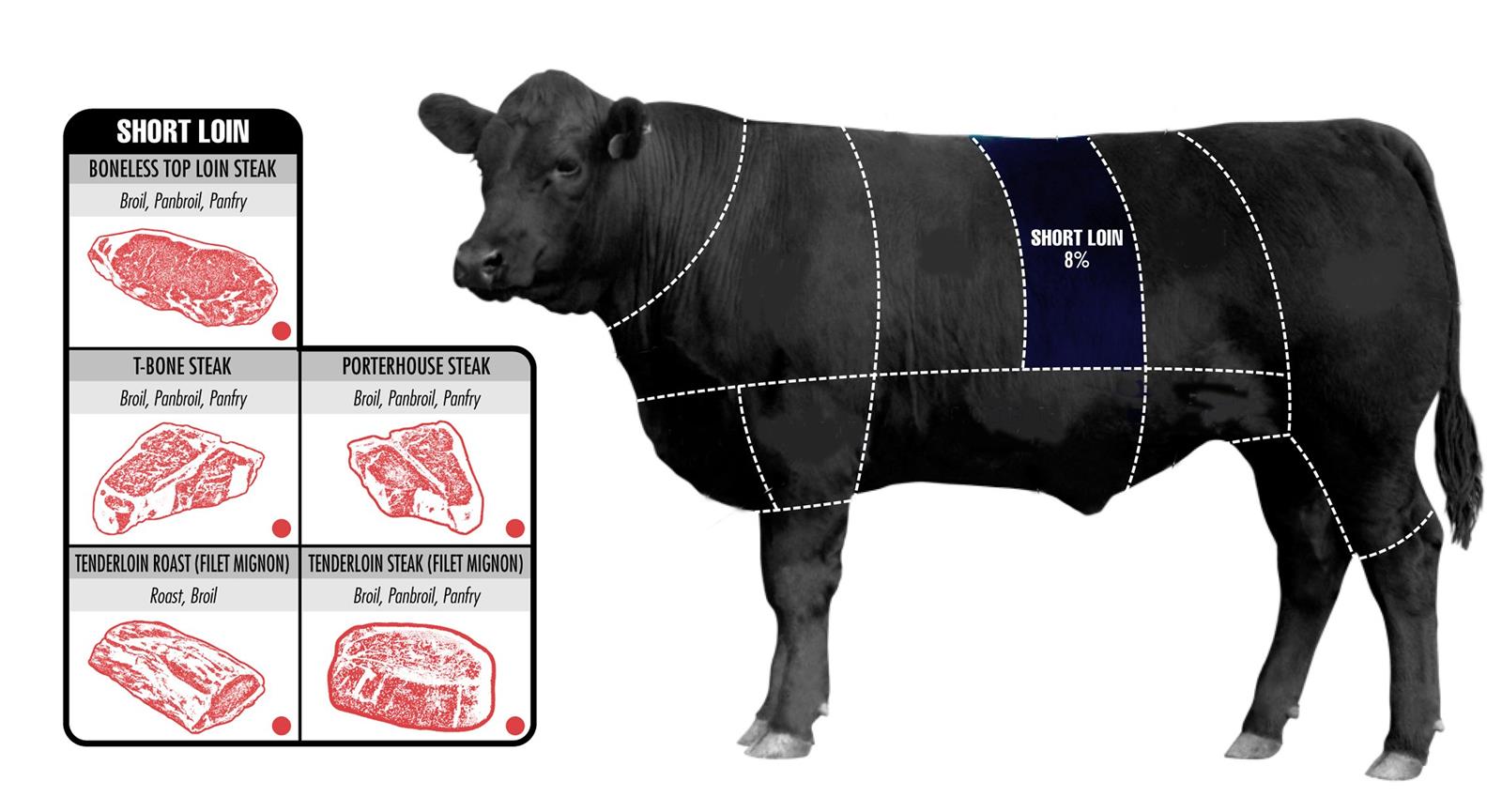 Ribs are generously marbled, so they have an extremely tender, fall-off-the-bone texture and full-bodied flavor.

Smaller cuts like rib-eye steak are best for grilling and pan frying, large cuts like standing rib roasts are good for roasting, and short ribs are best braised. 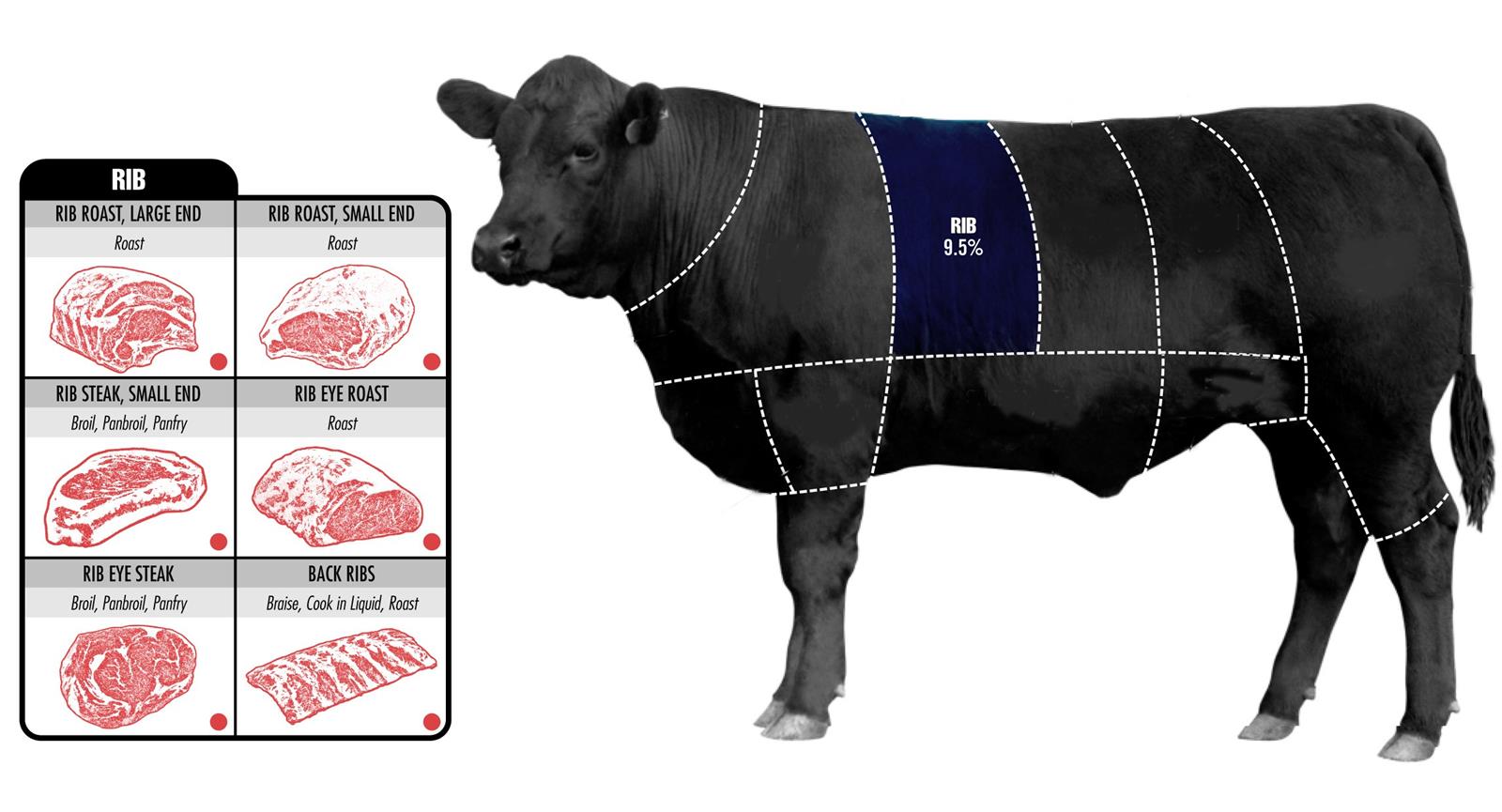 Not for the squeamish, beef tongue, liver, kidney, and heart are common cuts to find in butcher chops, too. Tongue is fatty, usually boiled, and common in many types of cuisines including Mexican, Indian, Portuguese, Brazilian.

Calf livers are considered a delicacy around the world, and can be baked, boiled, broiled, fried, stir-fried, or eaten raw.

Though almost no one eats beef kidneys in the US, they are low in fat and high in protein. Typically, they’re used in stews or served rare.

And beef heart was once a common meat for the poor, but because it’s so lean and flavorful it’s now coming back into the mainstream. It can be simmered, baked, or braised. 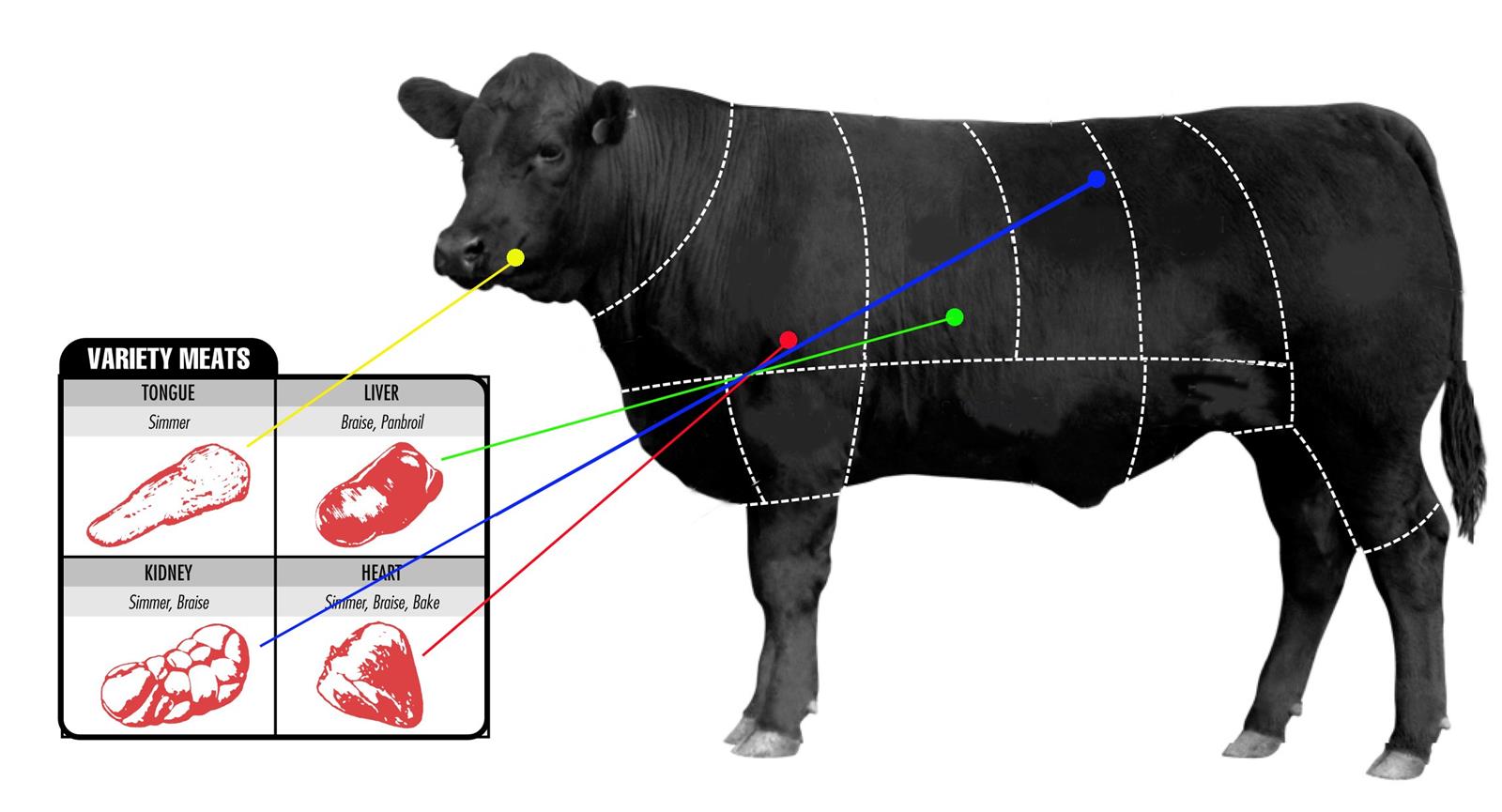 Knowing the best way to prepare each cut of beef does make cooking easier and a dish more enjoyable. Share this useful article with anyone you know that enjoys a good slab of beef.