You’re pulling up to the drive-thru and the person behind the window asks for your money. Have you ever taken a minute to wonder, maybe this person has seen some things. Weird things. Terrifying things. After all, it’s not always smiles and Kid’s Meals. Especially in the later hours of the night.

20 people share some of the best, albeit unverified, stories from behind the drive-thru on AskReddit. Enjoy! 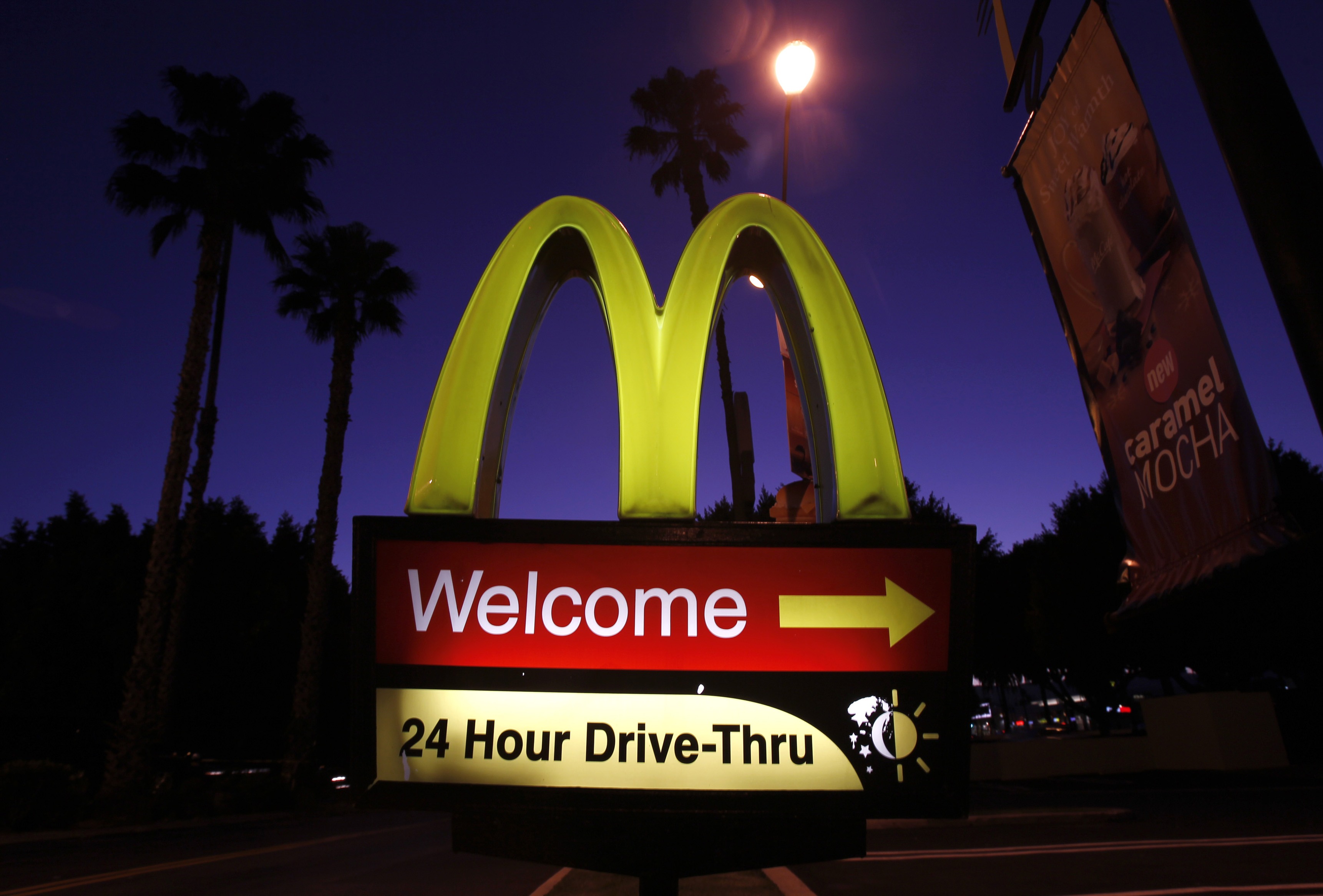 At McDonald’s, a car full of naked people drove up and ordered food, with paper bags on their heads. I believe one of them referred to another as ‘Mom’.

When I was working the drive thru at Popeyes, we would always tend to get this one couple who would come by. Sure, we had plenty of regulars, but every employee knew of the Human Tables. There was always the four of them, the dad, mom, sister, and brother, and they always rolled up to the window with AT LEAST 3 big bags of food from other fast food places. Not bags of trash, but bags of uneaten food.

We would call them the Human Tables because they all had their seats all the way back and would use their stomachs as tables. The smell was pretty horrid as well. I mean, imagine a family that eats 4 big ass bags of fast food from multiple fast food joints for every meal. Pure terror I tell you.

This guy’s car is trashed 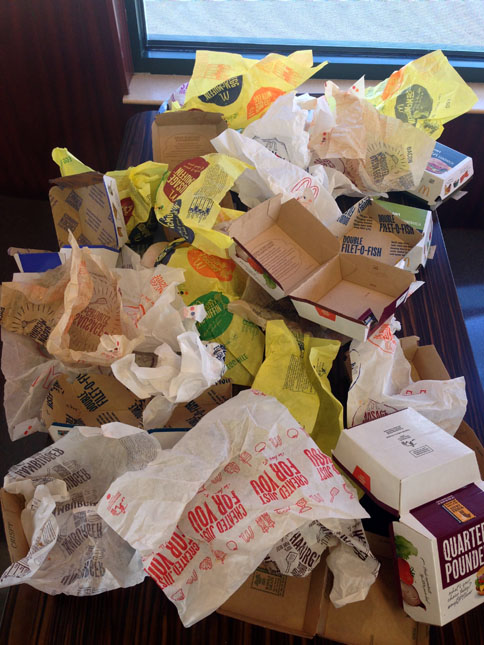 While working at Arby’s this car FILLED with trash came up to the window…when he handed me the money I got a whiff of a putrid odor coming from the car, the guy was obviously homeless and lived in the car. As he pulled away I saw 3-4 six gallon buckets filled with urine and feces swishing around in the back seat.

He sure has a type

While working at my first job, McDonald’s: greasy, unshaven man who was missing teeth pulls up in your stereotypical sketchy white van. Hanging from his rearview mirror are 3 or 4 pairs of little girls’ underwear.

Weirdest for me was a couple that came through with a sheet cake on the seat between them, half eaten, with forks sticking out of it. They were just driving around eating a god damn cake. and apparently they needed to take a burger break from their cake.

A pair of nice guys

Working at McDonald’s at 3am on a Sunday morning, I handed out food to a very nice gentleman. He must have been very nice because the guy in the passenger seat was giving him head, and he (the passenger) looked up and smiled at me as I handed them the drinks, which meant I got to see the driver in all his glory. He had no pants on at all from what I could see, so this seemed premeditated, which was the worst part of the experience. Ah, that was a wonderful place to work.

Working at taco bell this summer a guy came through the drive through and he was jacking off his dog that was sitting in passenger seat.

Half M&M, Half Oreo McFlurry 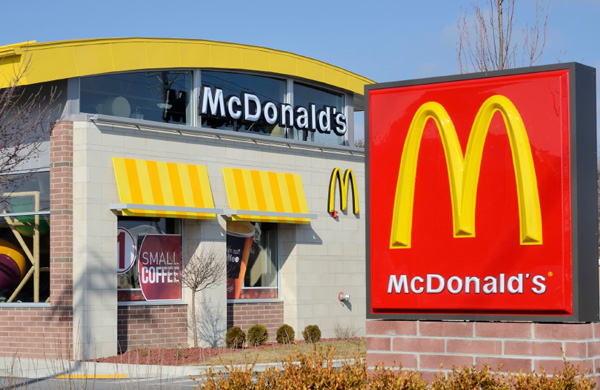 Working the McDonald’s drive through at 11 am on a Sunday morning. A lady orders a McFlurry (half M&M, half Oreo). Comes up to the first window where I am. Says hello and gives me her card to swipe. Completely ignores the fact that there is a crying teenage girl curled up in the fetal position in the passengers seat wearing nothing but a bra and panties.

Also there was this lady that had so much stuff in her old box style minivan passenger seat that it was almost formed to the shape that half of her body took when she sat in the car.

A pregnant girl was tweezing out hair from her belly. I was definitely not expecting to see that.

I worked at Taco Bell once upon a time. It was about mid afternoon, and it was hot as hell outside. One of our registers was down so I was taking the payment and giving the food out at the same window. A lady pulls up to my window and I tell her the total. I don’t remember exactly how much it was but it was probably around seven or eight dollars and some change. She was very large and sweating heavily, she looked dirty but luckily I couldn’t smell her. First she pulls a couple bills out of her bra and hands them to me, they were moist but it wasn’t something I had never had happen.

She then reaches deep down under her boob and literally pulls out a hand full of change. FULL! I looked at her, I looked at her boob change and I said “It’s okay, your close enough without the change.” I handed her the food and she went on her way, but man there was no way I was touching that! All I could see in my mind was that episode of Spongebob where Bubbles Bass hides the pickles from his crabby patty under his tongue, except it was coins on the underside of a sweaty fat lady’s boob. Ew.

The other day my friend and I went through a drive-thru. My friend ordered like 4 apple pies. When the guy at the window handed him the bag, my friend leaned out the car window, looked the guy dead in the eyes and, in the creepiest voice possible, said “They’re for my ass” and drove off. The look on the guy’s face was priceless.

I worked at Sonic as a carhop in highschool. I don’t know if there’s Sonic up north, I’m from South Oklahoma, but it’s basically a drive in, you press a button, order, and your food is brought out to you. Well, as employees, when we were bored, we would sometimes tune into the different boxes and just listen, usually get the radio, or conversations, nothing really interesting, usually. Well this night, we saw a car in the back of the lot who hadn’t ordered yet. So, naturally, we tuned in. It was quiet at first, then we heard a few grunting noises and realized “They’re having sex in our parking lot!”

So we drew straws and decided I was the one who would bring the “Happy tray” out (basically a tray with condiments on it that you go car to car with). So its pitch black out, our lot isn’t very well lit, I get out there, peer in the shaking car and very innocently say “Would yall like a mint?” (all the while I know my coworkers are listening in) The car stops shaking, I see a shadow of a face look at me and say “Back in my day if a car was rockin, we stayed the Fuck away.” I heard several giggles from the back as he flipped on an interior light. There were three women in the back pushing 80, no joke, and this stallion of a man was at least 90 years old. I can never unsee that.

He came three times that night

I worked at a taco place in a small town in High School, a guy came through the drive-through he was totally fapping to a Penthouse Magazine. He had one hand in his ‘pocket’ and one hand on the steering wheel, he came through three times that night. I still think of it whenever I drive past that place. I can still picture that guys face.

Weirdest not disgusting at all. Guy drove through McDonalds’ drive thru with no arms. He was by himself and he was the one driving. He had no arms whatsoever, drove with his feet. Handed (pun intended) me a twenty from between his toes and then carried a hat with his toes out the window for change.